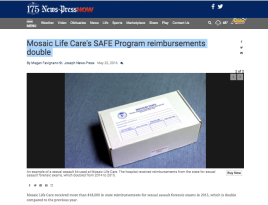 The state reimbursed Mosaic Life Care for more than $18,000 for sexual assault forensic exams in 2015 — that’s double compared to the year before. Natalie Maupin, Mosaic registered nurse and forensic program coordinator, said the increase does not necessarily mean there’s been a rise in sexual assault patients.
Read the full story here.

In an email addressed to friends and labeled confidential, former University of Missouri System President Tim Wolfe lobbed accusations of bad leadership and bad faith and called for his supporters to put pressure on the Board of Curators to give Wolfe a sweeter financial deal. 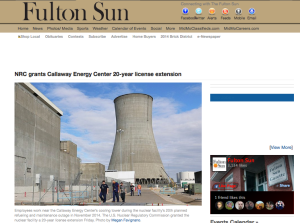 Despite pending contentions, the U.S. Nuclear Regulatory Commission (NRC) renewed the operating license for Ameren Missouri’s Callaway Energy Center (CEC), which generates electricity for about 20 percent of Ameren’s 1.2 million customers in the state. 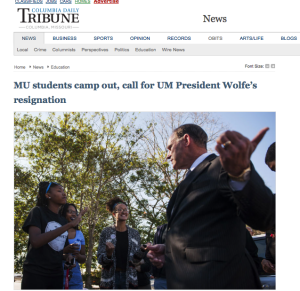 A group of University of Missouri students concerned about race issues on campus showed up at UM System President Tim Wolfe’s office, calling for his resignation. Students also set up tents near Traditions Plaza the night before and said they will camp there until Wolfe is removed from his position. Students criticized Wolfe for inadequately addressing race issue on campus.

Police investigate death of teen with ‘a beautiful spirit’

St. Joseph police began investigating the homicide of 18-year-old Skylar Powell, who was found dead in the middle of the night of a gunshot wound. His mother shared memories of her son.

A 4-year-old girl returned home after she was accidentally run over by a riding lawn mower. She had multiple surgeries, during which her right foot and ankle were cut off.

The loss of four children after a house caught fire sparked an emphasis on fire prevention in the city of Trenton. Through new laws and requirements, city and fire officials have aimed to ensure each home, especially rental properties, has the appropriate number of smoke detectors.

More than 60 graduate students used the first floor of Jesse Hall as their office during a “grade-in” event. The Coalition of Graduate Workers, a student group unaffiliated with the university and working toward forming a union, organized the event as part of its graduate education week activities. Organizers encouraged graduate students to bring folding tables and chairs or find a spot to sit on the floor in Jesse Hall while they did their work.

Wireless sensor systems installed in about half of the TigerPlace assisted living community’s living spaces constantly monitor residents’ vitals and calculate their risk of falling. That monitoring system, created by University of Missouri researchers, is starting to appear in other assisted living homes and hospitals throughout the state. A new program through the Sinclair School of Nursing is helping the technology break into the mass market. 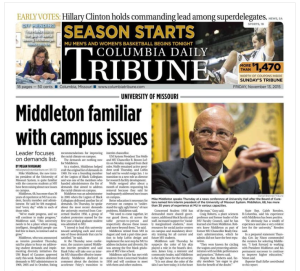 Mike Middleton, the new interim president of the University of Missouri System, is quite familiar with the concerns students at MU have been raising about race issues on campus.

Middleton, 68, has more than 30 years of experience at MU as a student, faculty member and administrator. He said he felt marginalized “every day” while in each of those roles.

Webster University projected a budget shortfall — similar to the university’s financial state eight years ago. Former Faculty Senate President Jim Brasfield said the shortfall wasn’t a crisis then and isn’t a crisis this time. But he said finances are fragile.

‘Webster University men’s soccer associate coach, player reflect on family dynamic on and off the field’

Marty Todt, associate men’s soccer coach, described two things in his life as “fleeting” — the soccer seasons and his nephew’s time at Webster. His nephew Patrick McCaffrey was a senior forward on the men’s soccer team in 2013. Both discussed keeping soccer and family separate.